Back to all posts

What could be more appropriate than an Odyssey show on April Fool's Day? The Greek hero most known for playing loose with the truth featured on a day dedicated to recreational lying.

So I set up in my office for what would be my third appearance in conjunction with the kind folks at Valencia College in Florida. I played The Blues of Achilles twice for them (once last year and once this) and I was thrilled for the chance to play my Odyssey as part of their speaker series.

After a generous introduction I launched into my songs and they felt good. Doing the piece for a second time in two weeks after a long layoff was comfortable and I was able to access the entire range of vocal tools the composition demands, well into my yearly ritual of feeling how I've changed relative to raw source material that has been the same for almost 20 years.

After I finished singing, we had a real luxury: almost 40 minutes to dedicate to a discussion moderated through the Zoom Chat by one of my hosts.

The questions were fun, insightful, smart, and diverse: exactly the type of discussion I've come to love almost as much as performing. Truthfully, I see no distinction between performance and discussion: they are part of one event for me and my work, emblematic of the special almost inseparable relationship between performer and audience. The discussion is a negotiation of what the unique meaning of my songs are that day in that moment, the first draft for the audience that will never be that immediate to my version of the story again.

Nearing the end of the program, this question was posed: If you could time travel, would you want to go back and play your songs for Homer and see what he thinks of them?

Setting aside the obvious, uh, existential component here (i.e. Homer's existence or lack thereof), what a great question to ponder. I'm imagining a Bill and Ted's Excellent Adventure So-Crates scenario (because truthfully, what other sort of better such scenario could there be?)...

I rambled around some possible ramifications of such a meeting (most likely to me is that Homer would be jealous that I get to perform remotely without dealing with drunk and smelly Greeks) and then connected it to how much of what we think we know about Homeric Epic comes from comparative study, from analyzing and imagining how things we can study in real time are like (or unlike) things we can't.

I talked a bit about Lord and Parry's work in The Singer of Tales and how Parry's initial investigation into the guslars in the former Yugoslavia occurred in the early 1930's, right as the full flowering of Delta blues was happening in the United States, right as that tradition went from being entirely oral and ephemeral to documented and preserved through commercial recording. What if instead of going to Yugoslavia in 1933, Parry had chosen to seek out and study Robert Johnson (who was finally recorded in 1936) or Son House (who recorded in the early 30's and then barely again until the 1960's) or Charley Patton (who died in 1934) or got to Muddy Waters a decade before Alan Lomax did in the early 1940's?

Interestingly, David Evans, a student of Albert Lord's at Harvard in the 1960's who wrote his undergraduate thesis on Epic Poetry, applied these principles to American delta blues in the late 60's and early 70's and was able to find musicians in Mississippi still composing and performing the blues as it was in the 1920's and before. He wrote a book called Big Road Blues that uses as its model The Singer of Tales.

Maybe with this theoretical time machine we could do what Bill and Ted did: go through the ages and collect bards from every era, from even before Homer, maybe even the model for this beautiful Cycladic harpist that predates Homer's time by 1500-2000 years... 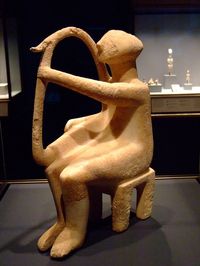 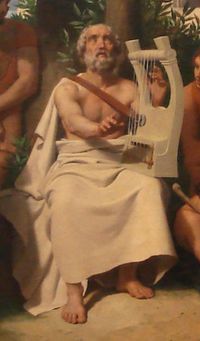 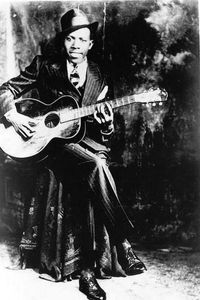 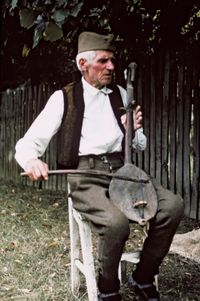 Maybe we get us all together: the Cycladic harpist, Homer, Robert Johnson, a guslar, and me, and we compare notes on what it's like being a bard and telling stories.

Heck, we could even include in this gathering our titular fabulist himself... 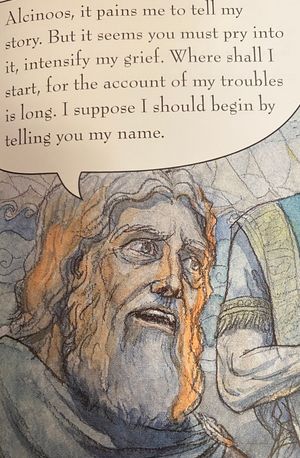